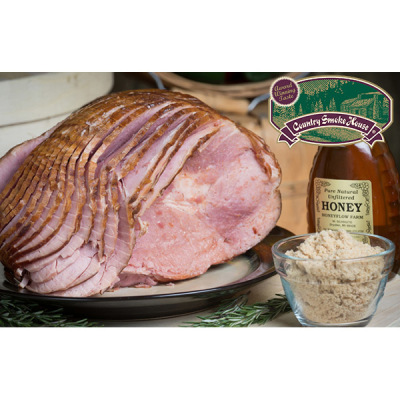 The Country Smoke House presents the finest spiral ham that money can buy.  Each tender, moist ham is specially prepared using individually selected hams to ensure uniform size and appearance; sugar cured with our old family recipe; trimmed by our mast butchers; hickory smoked and slow cooked to perfection; glazed with a tantalizing mixture of honey, brown sugar and spices.  A mouth watering treat that can’t be beat on any day!

Removing slices from a whole ham

Place the ham on a flat working surface with the fat side facing down, or place the ham in a spiral ham stand with the shank end down.

Cut along the natural fat seams of the ham and around the center bone for easy removal of the spiral slices. Follow this same procedure to remove slices from a spiral sliced shank portion of ham.

Serving- Each ham in fully cooked and ready to serve. Slices may be removed, as described above , and placed on a platter; the ham may be set on a platter, fat side down, allowing the slices to fan our naturally; or the ham may be placed in a ham stand.

Reheating- Wrap the ham tightly in foil, or place it in an oven roasting bag, and place on an oven approved tray or pan. Preheat the oven to 325 degrees and heat ham for 10 minutes per pound.  The ham is already fully cooked; do not overcook!

Do not set the ham at room temperature to thaw it or to warm it!

Select your cut of steak Prepare steak for cooking Brush Olive Oil on all sides of steak Apply Steve’s House Rub to all sides of steak Cook steak on both sides on high for 3 to 4 minutes to lock in moisture Turn grill down to medium heat and finish cooking to preferred doneness Please remember when cooking and consuming your steaks that: Consuming raw or under cooked meats, poultry, seafood, shellfish, or eggs may increase your risk of food borne illness.

Cooking Instructions for Fully Cooked Bratz Cooking on Grill: Preheat grill to medium-low. Grill sausage for 12 – 14 minutes or until heated through, turning often. *If possible, use tongs rather than a fork to prevent casings from puncture.* Cooking on Stove Top: Place sausage in a pan, add 1/2-inch water and cover pan. Simmer on medium-low heat for 6 – 8 minutes or until heated through. Cooking in Oven: Preheat oven to 350°F. Place in a glass pan and add 2 cups of water. Bake for 14 to 16 minutes or until internal temperature reaches a minimum of 140°F. Cooking in Microwave: Place sausage in a microwave-safe shallow bowl, add 1 cup water and cover bowl. Microwave on high…

Grilling Tips If your meat is frozen, cook it from the frozen state.  Thawing before grilling allows the juices to escape Consumption of Raw or Under cooked Food May Increase Your Risk of Food borne Illness BURGERS & STEAKS – Sear both sides on higher heat to lock in the flavor and juices; then finish grilling on low heat turning occasionally. CHICKEN BREASTS – Cook on a low heat.  The slower you cook the chicken. The more tender & flavorful it will turn out. Pre-COOKED SAUSAGE – Cook on a low heat.  Grill until sausage is warmed through. RAW SAUSAGE – Slow cook on the grill until the internal temperature reaches 160°F.

Prime Rib Roast Cooking Instructions Cook Roast in oven for ½ hour at 400 degrees to sear in the juices. Reduce temperature to 325 degrees. Use meat thermometer to determine desired internal temperature. Rare – 130 degrees Medium Rare – 135 degrees Medium – 140 degrees Well – 150 degrees Roast will cook approximately 15 min/lb. Do not cover, cook in a very low-sided or shallow pan.  Ovens do vary, so watch closely.  Remove rib roast from oven as soon as desired temperature is reached.  The roast will continue to cook after removal from oven. Standing or cradled rib roast: The meat is previously severed from the bones, seasoned and finally tied back together for cooking.  After cooking, cut ties, lift off boneless meat from… 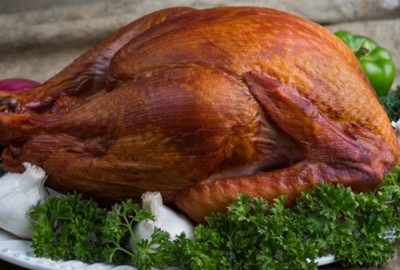 Smoked Turkey Cooking Instructions Smoked Turkey Our smoked turkeys are fully cooked.  It will be pink on the inside because they are injected with cure – just like a ham.  You can eat your smoked turkey cold or warm.  If netting is still on the turkey, peel off before cooking or serving. You may warm it in the oven at 325 degrees for approximately 10 minutes per pound.